HomeArticlesAcademic versus intuitive approaches to music

Academic versus intuitive approaches to music

By this I mean the difference between performing music with or without a lot of intellectual involvement as you play.

A basic level of musical education is essential to good improvising or composing.

The means by which you gain this knowledge though, can be highly varied and doesn’t have to come from formal lessons.

Being around other musicians, exchanging ‘tricks’, learning new chord progressions, and copying licks from your favourite guitarists; these all constitute a form of education.

This was the primary method of learning for many guitarists in the days before information was so easy to come by.

It’s especially true for less technical styles of music such as blues.

As well as musical knowledge, the other often-sighted factor in what makes a good musician is what some describe as musical intuition.

Different people give it different names but it is essentially one’s ability to ‘be’ musical.

This is an ability we all have in varying degrees and something that we develop over time as we become more experienced.

An incorrect assumption about music

Something that I’ve noticed over the years is that some guitarists seem to view academic and intuitive approaches to music as having a sort of ‘either-or’ relationship with each other.

In other words: guitarists are either academic players or intuitive ones.

In graphical form this would look something like this: 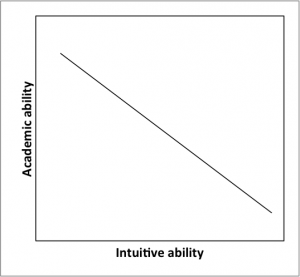 … with each of us somewhere along the line.

Can this relationship really be true though?

My experience in learning guitar

When I first began playing guitar I considered myself to be fairly naturally musical, as many of us do.

I could certainly pick out chords and melodies reasonably well despite having had no formal training and little understanding of what I was doing. I was actually proud that I had virtually no tuition and didn’t see much need for it at that time.

At school I would sometimes hear people play through their latest grade 6 piano piece like machines.

The notes were clearly correct and the performer was technically very proficient, but some of these players sounded very unmusical to me. This would only further affirm my belief that I was intuitively musical and they were not.

As time went by though, I began to meet other guitarists who were more advanced than me.

I started to slowly realise that their technical understanding of music meant that they were capable of far more than I was.

My intuitive approach to music would only get me so far.

In addition, they weren’t all robotic players, like those I’d seen in the past. Some of them really sounded very musical indeed.

This was something of a wake up call for me.

So, after years of avoidance, I finally accepted that I needed to learn my instrument properly and took some high quality lessons; I began taking an ‘academic’ approach to music.

The knowledge I acquired was invaluable.

My technical knowledge, knowledge of music theory and my musical vocabulary advanced dramatically. I learned all my scales and arpeggios, and I became a far better musician because of it.

My technique improved too and I became capable of playing much faster than I could previously.

So did this learning and development of technique do any damage to what I had perceived as my intuitive approach to music?

Although I could and still can sometimes be guilty of overdoing things, I could do everything that I could do before, and a great deal more.

If there is a relationship between musical ability and academic ability in music, then it must surely be something more like this: 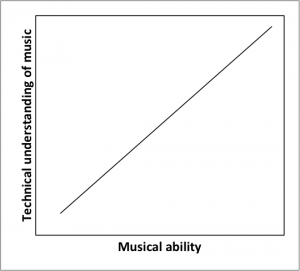 … with musical ability being broadly dependent on technical understanding of music.

In a sentence: the more you learn, the greater your ability as a musician.

I know this kind of simple relationship, and graphs in general, are often frowned upon within creative subjects such as music. But there are broad truths that can be best shown in this way.

Yes, there are always some exceptional examples of musicians that achieve a lot with relatively limited musical knowledge. But nowhere near as many as we are led to believe.

It’s far more glamorous to market someone as a ‘natural talent’ than a hard working student of music (as the master songwriter Sting admirably still regards himself).

It can therefore be tempting to avoid the more academic approaches to music.

My advice is that unless you are 100% certain that minor pentatonic shape 1 will cover all your musical needs throughout your life, you should embrace learning your subject thoroughly. Open yourself up to new sounds and approaches.

The fact is that we are all ‘intuitive’ musicians in the sense that we all perform intuitively within our sphere of knowledge.

This sphere is not of fixed size however. It is yours to expand as much or as little as you choose.

If you liked this article ‘Academic versus intuitive approaches to music’ please share it with others.