Chords are the backbone of popular music.

Guitarists spend lots of time learning chord shapes so that they can strum through well-known songs they like, or their own compositions; aka ‘rhythm guitar playing’.

What about making more of these chords though?

How can we improve our rhythm guitar playing from an adequate performance to an excellent one?

Some guitarists approach chord-based repertoire like a novice cook might approach a recipe, dutifully doing no more and no less than what is prescribed on a chord chart.

If the chart says play G they play a G.

There’s certainly an argument that guitar parts should be performed just as the guitarist did on the original recording.

However, a far better performance can often be given with just a little artistic licence and application of music theory (see ‘Why learn music theory?‘).

This is particularly true if the original recording was performed as a band and you are performing as a soloist or in a duo.

Here are some of the most effective ways to improve your rhythm guitar playing.

Using bass notes is one of the best ways to improve your rhythm guitar playing.

Bass notes have a special status in music. They have a big impact on the character and effect of the notes played in the upper registers.

Performing only the guitar part of a recording that has a bassist on it, can sound incomplete or overly simplified.

The notes the bassist plays on the track may be essential in order for the tune to sound ‘right’. With a little work, these bass notes can often be incorporated into a performance with little or no sacrifice of the underlying chords.

To take an example, rather than playing a bar chord that uses 5 or 6 strings, playing a fragment of this chord on the D, G and B strings frees up the E and A strings to be used for different bass notes.

So instead of just a plain old D major chord, you could try the following: 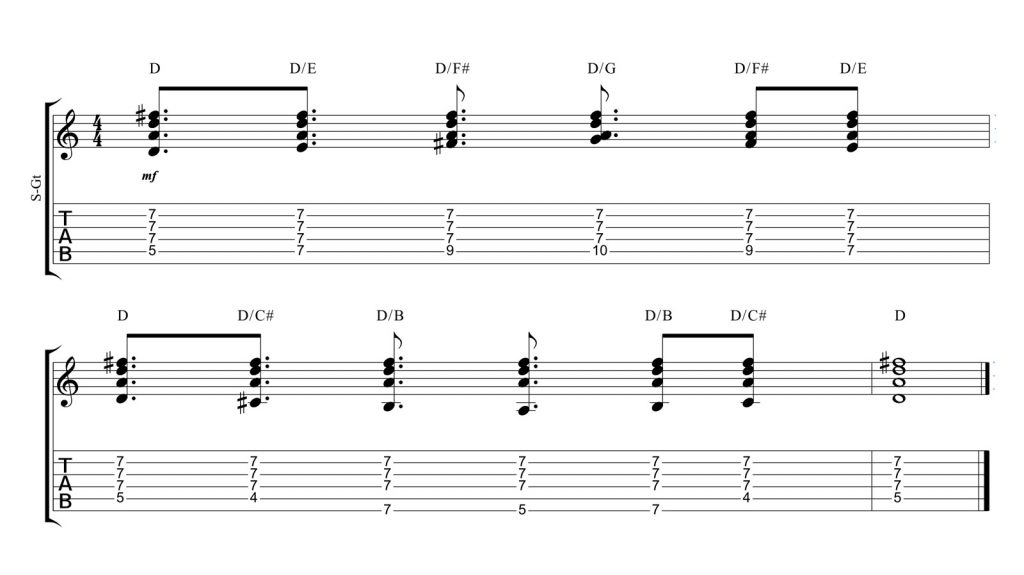 This can mean using unconventional fingerings, and a little jumping around on the fretboard. But with a little practice, what at first feels awkward soon becomes as familiar as any other chord shape. For more on learning ‘unnatural’ technique, see my article ‘There is nothing natural about playing the guitar!‘.

At its most basic, this could mean including the 3rd that the bassist plays over that G major chord, or a descending bass line over a static I-chord (which is very common in popular music).

By the way, if you don’t read rhythms that well yet, don’t worry. Just play the frets shown in the example. It’s the notes that we’re interested in here.

For a practical demonstration of adding basslines to your rhythm guitar playing watch the video below on major chords:

For a practical demonstration of adding basslines to minor chords in your rhythm guitar playing watch the video below:

If you’re not familiar with music theory yet and you’d like to get started, you can try my music theory app which teaches the relationships between chords and keys: click here to watch a demo of ‘Music Theory – Chords in Keys’.

On a more advanced level it could mean incorporating entire bass lines into the performance. How far you take this approach comes down to taste and of course technical ability. Your arrangement has to be playable after all.

If you’d like to learn how to read rhythms (and I recommend you do!), try the excellent book Modern Reading Text in 4/4 For All Instruments

If the required chord at a particular moment is a Gm you can use a little knowledge of music theory to choose other options.

You could apply one or more of these alternative ii-chords as a direct substitution for the Gm.

Alternatively you could use them just as brief musical sidesteps back and forth from the basic Gm chords. This introduces a little movement to your guitar part, and can be far more interesting than just strumming away at that plain old Gm.

Each of these chords has its own unique flavour, which may or may not be suitable for the tune you are performing. Try various options out and use your judgement.

Check out the video lesson below for lots of examples of chord extensions that you could use in your playing:

Fills and phrases to improve your rhythm guitar playing

Instead of clinging to the prescribed chord through thick and thin, you can temporarily abandon it and play a short, relevant, musical phrase in its place before jumping back onto the chord again.

Jimi Hendrix was a wonderful rhythm guitar player who frequently did this; particularly in songs he performed with a clean sound  sound, such as ‘The Wind Cries Mary’, ‘Little Wing’ and ‘Hey Joe’.

For a demonstration of Hendrix-style rhythm guitar applied to major chords, take a look at the video lesson below:

And for a practical demonstration of adding Hendrix-style fills to minor chords, take a look at the following videos guitar lesson:

More on this in the soloing example below.

If you know what chord number you are playing within a given key (I, ii, iii ,etc) then you can also choose to using neighbouring chords from this key to create movement and interest in your rhythm guitar playing.

If you’re playing a V-chord for example, you can briefly use the IV-chord or the vi-chord before returning to the V-chord. So if the current chord in hand is G7, you could briefly use an F or an Am – or both.

This should be done whilst maintaining the groove of the performance, and can be done with or without  retaining the root of V-chord in the bass.

This approach can be extended to other chords within the key as well, though some chords work better than others.

Experiment and see what works for various tunes and settings, and watch the following video for some demonstrations:

Performing tenths can be a good option for creating a more elegant sounding arrangement than just bar chords.

Tenths are a common approach in the world of classical guitar, but can work equally well in the performance of a sensitive ballad.

Instead of playing the most common 6-string bar chord, play just the root note on the low E-string and the 3rd on the G-string.

For the most common 5-string bar chord shape play the root on the A-string and the 3rd on the B-string.

Try comparing the two approaches in the example below: 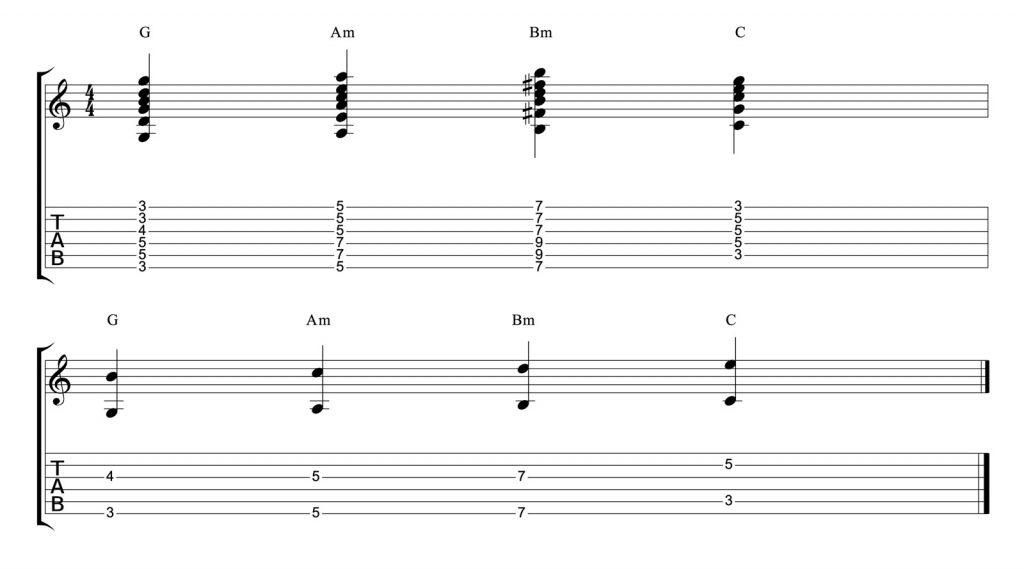 Isn’t that a nice sound? And you didn’t have to use any music theory at all in this case. We just played fewer notes in the chord shapes.

Red Hot Chili Peppers and Biffy Clyro are a couple of bands that you might have heard using 10ths like this.

Once again, experiment and use your judgement.

In addition to tenths, thirds and sixths can provide many melodic ideas to use in conjunction with basic chord work. Watch the following video for several demonstrations of each of these intervals:

If you have two bars of an open A chord to play, do you really have to stick like glue to that one chord shape like glue?

Maybe, in some situations. But more often than not you are free to jump on other A chords up the neck. In other words, you can make your rhythm guitar playing more interesting by using other chord shapes but which are nonetheless the same chord.

Watch the following video for a demonstration of this:

If approaching a tune in ‘guitar-friendly’ keys of say G, E, B, A, D or C, try including some open strings with your chords.

This can create original and interesting voicings that would be impossible to perform in other keys.

Compare the two version of chords in the example below:

In the second bar we play the same chords but just open up the high E and B strings.

Even without knowing any music theory, or what a Badd11 is, we’ve easily stumbled on an interesting musical variation.

A little experimenting in this way can change an average guitar part into a great one.

Take a look at the video below for a demonstration of using open strings with bar chords:

If you are performing on your own then approaching a solo by playing single notes may not work very well. The reason is that you would have to completely abandon the chords that you were playing up until then.

The change in texture is very significant. So your solo will likely sound weak and lonely in comparison to the nice full-sounding chord work that you were playing.

Instead, try using a more chord-based approach to soloing; take a ‘chord solo’. This could mean a combination of the various approaches above or using two or three notes at a time instead of one.

Holding a root note in the bass with the thumb, say, frees up the fingers to play something melodic on the higher strings.

Try finger picking this short example instead of playing a conventional guitar solo over the chords D, C and G major:

For a demonstration of several approaches to taking a chord solo, watch the video below:

Percussive notes in your rhythm playing

This is something that rhythm guitarists have taken to new heights in recent years. In the absence of a drummer, adding percussive notes to a performance is yet another option that can enhance a rhythm guitar performance.

Percussive notes can be produced in various ways by tapping or smacking the body of the guitar, by slapping the strings with the right hand and by picking strings that are muted by the left hand.

One common approach is to add a backbeat by slapping the strings with the right hand on beats 2 and 4. Although this may appear to be simple, even this can be tricky depending on what else is happening at the time.

Learning to slap with the fingers and at the same time pick a bass note with the thumb, for example, is far from intuitive. Once mastered, it is a very useful trick to have up your sleeve. Check out the video below for a practical demonstration of this very effective enhancement to our rhythm guitar playing:

If you’re tired of playing the same old chords, try using one or more of the above approaches. Apply them to real songs; even if it’s just in one small section, and gradually introduce them to your guitar practice regime.

If you don’t yet have a well-structured practice regime, sign up for my mailing list to receive my free ebook ‘How To Revolutionise Your Guitar Practice‘, which shows you how to do it.

Much like learning licks, if these methods are new to you it will take time for them to start to feel natural. But rest assured, they will become a natural part of your playing in time, and you’ll see a big improvement to your rhythm guitar playing.

Experiment with different tunes and situations, keep your ears open, be ambitious and practise!

If you liked this article ‘How to improve your rhythm guitar playing’ please share it with others.