HomeArticlesI can’t play guitar and sing at the same time

I can’t play guitar and sing at the same time

“I can’t play guitar and sing at the same time” is something I’ve heard many times.

In this article I aim to show that really anybody can sing and play guitar at the same time.

Singing and playing guitar is like playing other instruments

A pianist must make their hands perform two different rhythms simultaneously. For a drummer it’s all four limbs that must work independently.

In the case of singing and playing guitar, it is the hands and voice.

None of these examples are things that many people can do the first time they try it. They are unnatural abilities that take time to develop.

An experienced performer can easily give the impression that singing and playing has always been easy for them. But don’t be fooled. They have had to go through their own difficult learning phase; just like the rest of us.

So how do you learn to sing and play guitar at the same time?

Firstly, to use a computer metaphor, be aware that there is only so much CPU to go around.

If a person is intellectually engaged in trying to remember what a B7 looks like whilst playing, it’s going to be virtually impossible for them to sing at the same time.

Your guitar playing ability must be adequately developed; so that making chord changes takes very little effort or conscious thought.

Secondly, you must have the ability to play rhythms accurately.

This includes having a consistent approach to strumming.

Usually this means moving your right hand constantly down and up regardless of when you strike the strings, with down movements on the beat.

See my article ‘A metronome is mandatory‘ for more on this.

If you need to work on your ability to play rhythms, I recommend the book Modern Reading Text in 4/4 For All Instruments

by Louis Bellson, which goes from simple to advanced.

If you don’t have a good metronome yet, try the Seiko SQ50-V Quartz Metronome

Thirdly, you must know the song.

As well as the chord changes, you must know the tune and the words very very well!

This may require putting the guitar down for a time in order to focus purely on the singing.

Seriously, whatever song you are attempting, go super-slowly.

Even what you think might be playing slowly could still be too fast.

It’s far better to sing and play with accuracy, albeit very slowly, than to be fudging rhythms at full speed.

You may even need to practise singing and playing a single individual line of a song at this slow speed.

At super-slow speeds, you can strum the chord, then sing the first syllable of the word that follows, then do the upstroke, and so on.

Let’s take an example using the first part of the song: ‘Yesterday’ by The Beatles.

The first musical line is just the word ‘Yesterday’ sung to this rhythm: 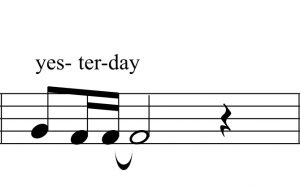 At the same time as this, you have to play this on the guitar: 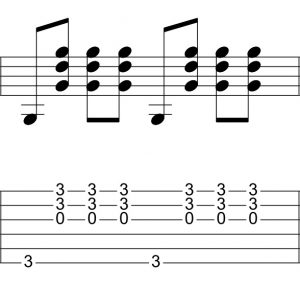 Now if you don’t yet know how to read rhythms, don’t worry. Try to at least listen closely to the original recording so you can hear the two different rhythms that the voice and guitar are performing.

Maybe play the song slowed down using a MP3 player that can do this.

Learning to sing and play these parts at the same time

The first note in the guitar part is also on beat 1. It’s fret 3 on the G-string – played with the thumb.

Note that we should be holding a G-chord throughout this bar.

So, this first part is easy. Just play the bass note and sing ‘yes’ at the same time.

On the guitar, we also have to play halfway through beat 1. We strum the three thinnest strings of the G-chord – probably upwards with our first finger.

So, this part is also easy too. We play the thinnest string and sing ‘ter’ at the same time.

Finally, we have to sing ‘day’. This time we are singing three quarters of the way through beat 1.

On the guitar however, we do not play three quarters of the way through beat 1.

The next time we play the guitar is on beat 2 when we do another finger strum of the three thinnest strings.

It’s this kind of situation that trips many people up and leads them to think that they can’t sing and play the guitar at the same time.

But all you need to do is practise the part very carefully and very very slowly.

Here are the two parts together, reduced to just the parts we’ve described: 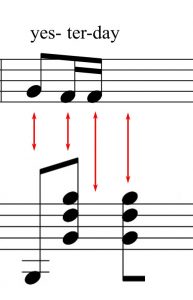 Even if you’re not that familiar with reading rhythms, you can see visually that you have to sing ‘day’ in between guitar strums.

This is the essence of learning to sing and play at the same time.

So, if you’re struggling to sing and play guitar at the same time, start with this example and do it slowly enough that you can accurately perform the guitar and voice part.

Everybody can do this at some tempo; even if it’s 30bpm.

Then, turn your attention to whatever other song you would like to sing and play at the same time.

Work on just one line at a time – or as in this case: one word.

Be patient. As it gets easier you will find that you can gradually speed it all up whilst maintaining the correct rhythms. Then you may well wonder how it was that you couldn’t always do it!

As with many aspects of music, singing and playing guitar at the same time takes practice.

Even once you have acquired the basic skill, you will still find songs that contain awkward combination of rhythms that trip you up.

When this happens, slow right down again and work through the problem area just like we did here.

If you find yourself saying “I can’t play guitar and sing at the same time”, know that there is nothing wrong with you. You just need to take the right steps. Why not start now…?

If you found this article useful, why not subscribe to my Youtube channel and receive free weekly guitar tips and lessons:

If you liked this article ‘I can’t play guitar and sing at the same time’ please share it with others.